Anastasia the Deliverer from Potions 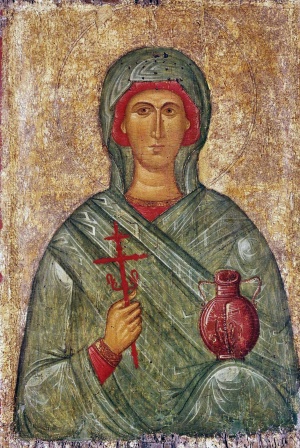 Anastasia was from Rome. She was the daughter of Praepextatus and Fausta and was beautiful in appearance, virtuous and from a wealthy family. Her mother instructed her in the faith of Christ. After her mother's death, she was given in marriage to a pagan named Publius Patricius. He subjected his wife to beatings and would keep her slaved in the house. She endured these torments for a short time since Publius drowned early in their marriage.

As a young widow, she never remarried and secretely dedicated her time to the poor, those in prisons and served their needs daily. She would wash their wounds and especially console them during their anguish.

Through her intercessions and prayers, she healed many from the effects of potions, poisons, spells and other harmful substances. This is how she received the honour of Deliverer of Potions. Her deeds and miracles spread throughout the area and her fame brought about her arrest under Diocletian's persecutions. She was tortured and endured many torments and was eventually put to death by fire in the year 290.

In the fifth century the relics of the saint were transferred to Constantinople, where a church was built and dedicated to her. This was the church where St. Andrew the Fool-for-Christ was brought to be cured from his foolishness, there St. Anastasia appeared to him in a dream and encouraged him to continue his ascetic feat.

Later her head and one of her hands were transferred to the Monastery of St. Anastasia the Pharmokolitria, Chalkidiki of Greece.

Kontakion in the Second Tone When they that are found in trials and adversities flee unto thy church O Anastasia, they receive the august and wondrous gifts of divine grace which doth abide in thee; for at all times, O Saint of God, thou pourest forth streams of healings for the world.

Kontakion in the Second Tone

Those in temptations and afflictions hasten to your templeAnd are restored by the grace that dwells in you,For you ever pour forth healings for all the world,O great Martyr Anastasia!

Troparion in the Fourth Tone

Your lamb Anastasia, calls out to You, O Jesus, in a loud voice:"I love You, my Bridegroom, and in seeking You I endure suffering.In baptism I was crucified so that I might reign in You, and I died so that I might live with You.Accept me as a pure sacrifice,for I have offered myself in love."Through her prayers save our souls, since You are merciful.

Troparion in the Fifth Tone

As a martyr you emulated the deeds of the martyrs,To whom you ministered,And, striving valiantly, you overcame the enemy.You are an abundant and overflowing source of graceFor all who come to you, O godly-minded Anastasia!