Risto Jääskeläinen was born August 10, 1945, in Tohmajärvi in Finland. 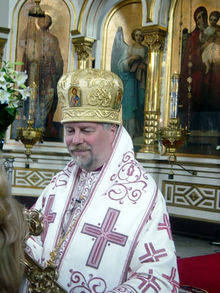 Risto Jääskeläinen was tonsured as a monk with the name Ambrose and then ordained a hierodeacon and hieromonk in 1979 as a member of the brotherhood of the New Valaam Monastery in Heinävesi. At New Valaam, Fr. Ambrose was appointed the monastery's financial caretaker in 1977. In 1986, he received the title of archimandrite from Archbishop Paul of Finland, and from 1986 to 1988 Fr. Ambrose was the right hand man of the monastery's igumen, Archimandrite Panteleimon (now His Eminence the Most Reverend Metropolitan Panteleimon (Sarho) of Oulu).