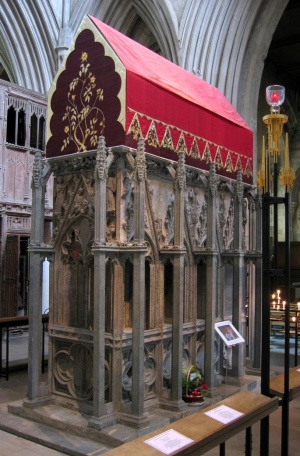 According to Bede's Ecclesiastical History, I.vii and xviii, Alban was a pagan living at Verulamium (modern day St Albans, England}, who converted to Christianity, and was executed by beheading on a hill above the Roman settlement of Verulamium. St. Albans Abbey at St Albans, Hertfordshire, England was later founded near this site.

The date of the execution is best left to the Venerable Bede: "when the cruel Emperors first published their edicts against the Christians" in other words, sometime prior to Christianity becoming an officially tolerated religion of the Roman Empire under Emperor Constantine in 324, when local Christians were persecuted by the Romans.

Alban sheltered a Christian priest, (Geoffrey of Monmouth's later interpolation giving his name as "Amphibalus," the name for a cloak) in his home, and was converted and baptised by him. When the "impious prince" (as Bede has it) sent Roman soldiers to Alban's house to look for the priest, Alban exchanged cloaks with the priest and was arrested in his stead. Alban was taken before the magistrate, where he avowed his new Christian faith and was condemned for it. He was beheaded on the spot where St. Alban's Cathedral now stands.