Our Father Among the Saints Aidan of Lindisfarne, Enlightener of Northumbria (?-651), was the founder and first bishop of the monastery on the island of Lindisfarne off the northeast coast of England. A Christian missionary, he is credited with restoring Christianity to Northumbria (Northern England). His feast day is August 31. 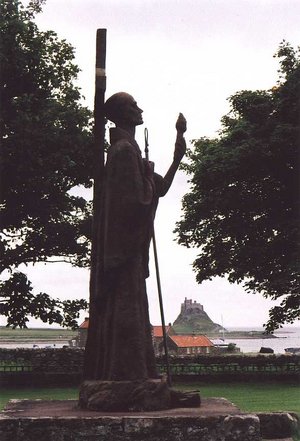 An inspired missionary, St. Aidan would walk from one village to another, politely conversing with the people he saw, slowly interesting them in Christianity. According the legend, the king gave Aidan a horse so that he wouldn't have to walk, but Aidan gave the horse to a beggar. By patiently talking to the people on their own level, Aidan and his monks slowly restored Christianity to the Northumbrian communities. Aidan also took in twelve English boys to train at the monastery, to ensure that the area's future religious leadership would be English.