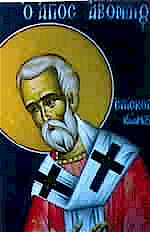 St. Abundius (also Abondius, Abundias, or Abbondio; early fifth century – 469) was a Bishop of Como, Northern Italy. His feat day is on April 2.