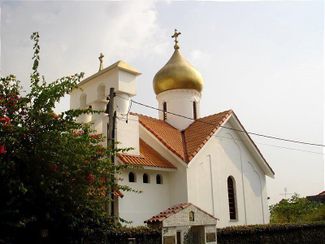 Church of the Holy Martyr Zenaide

The parish of the Holy Martyr Zenaide traces its origin to 1921 when about fifteen hundred refugees from the Russian Revolution organized a religious community, named in honor of St. George of Cappadocia. The community, however, was served for many years by St. Nicholas Church due to the lack of Russian clergy and availability of a suitable place to assemble. In 1930, the community petitioned Metropolitan Eulogius (Georgievsky) in Paris, requesting that he send a priest to Brazil for the Russian community. In response Metr. Eulogius sent Hieromonk Mikhei (Ordyntsev), who was in Peru, to serve the community.

At the organizational meeting of the parish council on April 28, 1933, the construction of a church was proposed. However, it was 1934 before the registration of the Russian Orthodox community as a legal entity was completed and a site was found in the Santa Teresa neighborhood to build the church. Construction of the church began on August 11, 1935, with the placing of the foundation stone by Archbishop Theodosius (Samoilovich) of Sao Paulo and All Brazil of ROCOR and Metropolitan Ilya of Tyre-Sidon of the Antiochian Church.

As construction of the church began, the wife of the architect, Gleb Konstantinovich Sakharov, died. He offered a significant sum toward the construction of the church with the condition that the church be consecrated in honor of the holy devotion of his wife who was not famous and much less of popular devotion, the Holy Martyr Zenaide. On August 29, 1937, the church and its altar were consecrated by Abp. Theodosius to the memory of St. Martyr Zenaide (commemorated on October 24). The first pastor of the Church of Santa Zenaide was Father Georgy (Gordov), a lawyer from a small town in Crimea before the Bolshevik revolution.

Following the end of World War II, the arrival of Russian emigres from both Europe and Asia added a new flourish to the life of the parish and community. Among the new arrivals was the choir director Boris Evgenievich Kirillov from Harbin, China. In 1956, Fr. Nikolai Padedin became the parish priest. In 1967, Fr. Nikolai was consecrated Bishop Nicander of Rio de Janeiro, vicar to Archbishop Theodosius of Sao Paulo. After the repose of Abp. Theodosius in 1968, Bp. Nicander became the Archbishop of the Eparchy of São Paulo.

In 1964, a serious conflict arose within the parish, between the parish council and the parish priest. The parish council and half of the choir and parishioners of the parish withdrew and moved to another church in Niterói. In 1968, the then parish priest Vasily Pavlovsky was prohibited from exercising religious service by the Synod of the Russian Orthodox Church Abroad because he refused to obey the orders of his ecclesiastical superiors. In 1969, he was deposed from the priesthood, but continued to perform religious services without authorization. In 1976, Fr. Vasily, supported by many of the parishioners, initiated for recognition by the Orthodox Church in America. After receiving recognition, Fr. Vasily officially assumed the leadership of the parish. After his repose in 1988, the church services were celebrated by Archpriest Anatoly Topala of the Church of St. Sergius of Radonezh of the Moscow Patriarchate in Porto Alegre under Metropolitan Platon (Udovenko) of the Diocese of Argentina and South America. In early 1999, the community expressed in a meeting with Archimandrite Theofan (Ashurkov), Vice President of the Department of Foreign Relations of the Moscow Patriarchate, a desire to move to the jurisdiction of the Patriarch of Moscow and all Russia. The transfer was completed later that year and was recorded in the Statute of the parish, approved at a general meeting of parishioners and registered at the Ministry of Justice of Brazil on January 27, 2000 and in Notary Notes in Rio de Janeiro on February 10, 2000.

Between January 2000 and October 2001, the parish priest Abbe Sergy Zyatkov began renovations of the rectory and the church yard with funds from the Moscow Patriarchate and donations from parishioners. On October 6, 2001 the Holy Synod of the Church of Russia appointed Pavel Feoktistov as the priest of the Church of Santa Zenaide. In December 2003, major renovations of the church began supported by funds from the Moscow Patriarchate. The renovations included relining of the altar and iconostasis walls with white marble with matching blue Bahia granite accented with a special variety Oak natural wood from Brazil. The icons were restored through donations. In a solemn ceremony on February 19, 2004 the church was rededicated by Metropolitan Kyrill of Smolensk and Kaliningrad, Chairman of the Department of Foreign Relations of the Moscow Patriarchate and the Metropolitan Platon of Argentina and South America, concelebrated with the clergy of the Brazilian deanery. At the base of the altar and on the corporal donated by Patriarch Alexei II of Moscow were placed the relics of the Hieromartyr Sergius Florinsky of Rakvere, one of the New-Martyrs of the twentieth century who suffered during the communist persecution.